The CSIRO program to reinvent science combines the skills, expertise, imaginations, and ambitions of scientists, engineers and designers from across CSIRO to create shared visions of future digital worlds for science. CSIRO are developing those visions into concrete scenarios of the future, then taking successful proofs of concept through to prototypes and implementations to be tested on real scientific problems.

My role has been to creatively direct and design a compelling hand gesture interface for Scientists interacting with ocean and atmosphere data in an augmented reality space. My proposition was to draw from the expert knowledge of Auslan (Australian Sign Language) as a language based in bodily expression to develop the gestures and their meaning in context. The above video was presented to the Scientists and the business team as a pitch for further development. The video was informed by my own desktop research and is not a correct representation of Auslan. 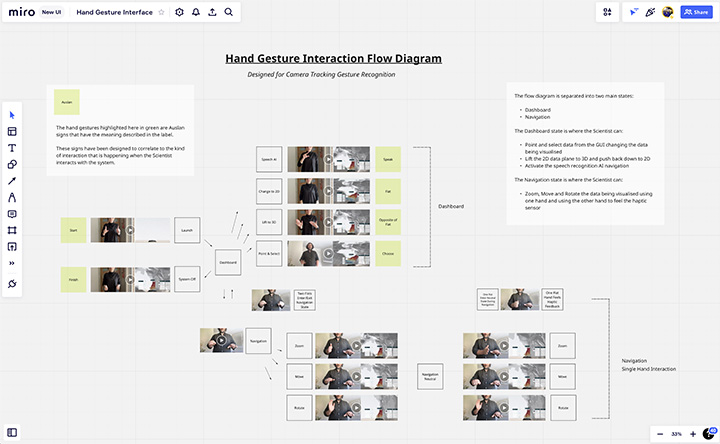 Seeking consultation with award winning Deaf Artist, Sue Jo Wright, we designed a series of gestures that were developed from Auslan that could correlate closely with the context of the interactions. Sue Jo advised that NMF (Non Manuel Features) like facial expression and movement would also need to be included to have the whole inclusion and reference to Auslan within the system.

We delivered these recommendations along with an interaction flow map built from video and motion graphics. The visual interface was developed by Jack Zhao at Small Multiples and the scenario for the design was provided by the strategic program leader, Viveka Weiley.